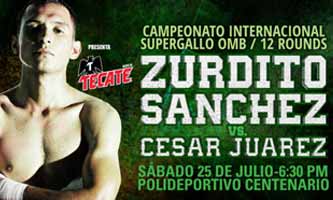 The former Ibf super-Flw champion Juan Carlos Sanchez Jr entered this fight with a professional boxing record of 20-3-1 (9 knockouts) and he is ranked as the No.9 super bantamweight in the world (currently the #1 in this division is Carl Frampton), while his opponent, Cesar Juarez, has an official record of 16-3-0 (13 KOs=81%) and he entered as the No.40 in the same weight class. Both boxers have suffered their last loss in 2013: Sanchez was defeated by Zolani Tete (=Sanchez Jr vs Tete) while Juarez lost to Hugo Partida. ‘Zurdito’ Sanchez vs Juarez is valid for the vacant WBO International super bantamweight title. Watch the video and rate this fight!