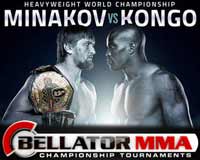 Review: 2014-04-04, fight not particularly good between Vitaly Minakov and Cheick Kongo: it gets two stars. The undefeated Vitaly Minakov entered this fight with a perfect mma record of 13-0-0 (92% finishing rate) and he is ranked as the No.10 heavyweight in the world, he is a black belt in judo and four times Sambo world champion, last year he fought three times and in his last bout he won the Bellator Hw title beating Alexander Volkov (by tko in the first round: Volkov vs Minakov).
His opponent, Cheick Kongo, has an official record of 20-8-2 (70% finishing rate) and he entered as the No.17 in the same weight class (currently the #1 in this division is Cain Velasquez). Kongo fought in the Ufc from 2006 to 2013 when he lost to Roy Nelson and he was released from the Ultimate Fighting Championship (=Nelson vs Kongo); after that bout he fought and won twice for the Bellator promotion. Minakov vs Kongo, main event of Bellator 115, is valid for the Bellator heavyweight title (Minakov’s first defense). Watch the video and rate this fight!