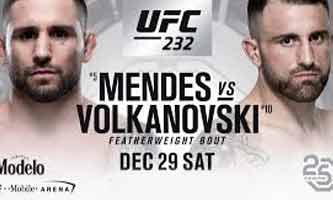 Review by AllTheBestFights.com: 2018-12-29, nice and tough fight between Chad Mendes and Alexander Volkanovski: it gets three stars (UFC Fight of the Night).

Chad Mendes entered this fight with a pro record of 18-4-0 (56% finishing rate) and he is ranked as the No.7 featherweight in the world (currently the #1 in this division is Max Holloway). He lost two consecutive bouts in 2015, against Conor McGregor (Mendes vs McGregor) and Frankie Edgar (Frankie Edgar vs Chad Mendes) but since then he has fought just once beating Myles Jury in 2018 (Chad Mendes vs Myles Jury).
His opponent, Alexander Volkanovski, has an official mma record of 18-1-0 (72% finishing rate) and he entered as the No.10 in the same weight class. He suffered his only loss when he faced Corey Nelson in 2013, since then he has collected 15 consecutive victories beating Shane Young, Jeremy Kennedy and Darren Elkins in his last three (Darren Elkins vs Alexander Volkanovski). Mendes vs Volkanovski is on the undercard of Jon Jones vs Alexander Gustafsson 2 – UFC 232. Watch the video and rate this fight!