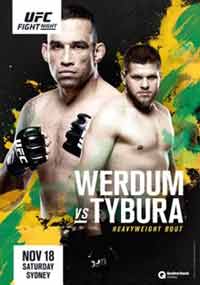 Review by AllTheBestFights.com: 2017-11-19, pretty good fight between Alexander Volkanovski and Shane Young: it gets three stars.

Alexander Volkanovski entered this fight with a professional record of 15-1-0 (80% finishing rate) and he is ranked as the No.27 featherweight in the world. He suffered his only loss when he faced Corey Nelson in 2013, since then he has collected 12 consecutive victories beating Mizuto Hirota in 2017.
His opponent, Shane Young, has a mma record of 11-3-0 (82% finishing rate) and he suffered his last loss in 2015, against Guan Wang; after this bout he has won five fights. Volkanovski vs Young is on the undercard of Fabricio Werdum vs Marcin Tybura – UFC Fight Night 121. Watch the video and rate this fight!