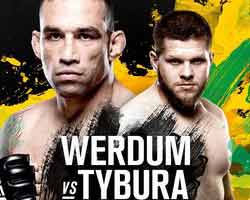 Review by AllTheBestFights.com: 2017-11-19, some good single shots between Fabricio Werdum and Marcin Tybura but it is not enough to get three stars: it gets two.

The black belt in judo, Brazilian jiu-jitsu and former Ufc Hw champion Fabricio Werdum entered this fight with a professional mma record of 22-7-1 (77% finishing rate) and he is ranked as the No.3 heavyweight in the world but he lost two out of his last four bouts, against current #1 Stipe Miocic (=Werdum vs Miocic) and with Alistair Overeem (=Werdum vs Overeem 3); after this fight ‘Vai Cavalo’ Werdum has beat Walt Harris (=Werdum vs Harris).
His opponent, the former M-1 Global Hw champion Marcin Tybura, has an official record of 16-2-0 (81% finishing rate) and he entered as the No.17 in the same weight class. He lost to Timothy Johnson last year (=Tybura vs Johnson) but then he has won over Viktor Pesta (=Tybura vs Pesta), Luis Henrique and Andrei Arlovski (=Arlovski vs Tybura). Werdum vs Tybura is the main event of UFC Fight Night 121. Watch the video and rate this fight!