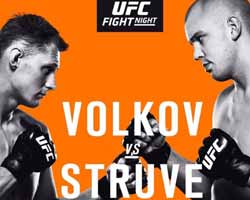 Review by AllTheBestFights.com: 2017-09-02, good exchanges between Alexander Volkov and Stefan Struve: it gets three stars (UFC Fight of the Night).

The former Bellator and M-1 Global Hw champion Alexander Volkov entered this fight with a pro mma record of 28-6-0 (75% finishing rate) and he is ranked as the No.11 heavyweight in the world. He suffered two consecutive losses in 2015, against Tony Johnson (=Volkov vs Johnson) and Cheick Kongo (=Kongo vs Volkov), but then he has won four bouts beating Timothy Johnson (=Volkov vs Johnson) and Roy Nelson in his last two (=Nelson vs Volkov).
His opponent, Stefan Struve, has a record of 28-8-0 (89% finishing rate) and he entered as the No.12 in the same weight class. He lost to Jared Rosholt in 2015 (=Struve vs Rosholt) but then he has won over Antonio ‘Bigfoot’ Silva (=Silva vs Struve) and Daniel Omielanczuk (=Struve vs Omielanczuk). Alexander Volkov vs Stefan Struve is the main event of UFC Fight Night 115. Watch the video and rate this fight!