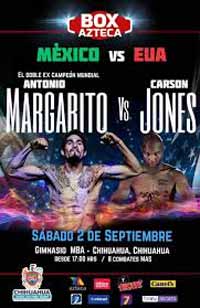 Review by AllTheBestFights.com: 2017-09-02, nice toe-to-toe fight between Antonio Margarito and Carson Jones: it gets three stars.

The former Wbo, Ibf and Wba Ww champion Antonio Margarito entered this fight with a professional boxing record of 40-8-0 (27 knockouts) but he is not ranked as he hasn’t fought since August 13, 2016 when he defeated Ramon Alvarez (=Alvarez vs Margarito). He had suffered two consecutive losses between 2010 and 2011, against Manny Pacquiao and Miguel Cotto (4-stars fight, Cotto vs Margarito 2) but then he had beat Jorge Paez Jr in 2016 (=Margarito vs Paez Jr).
His opponent, Carson Jones, has an official record of 40-11-3 (30 KOs=75%) and he entered as the No.26 super welterweight in the world. He lost the rematch with Brian Rose in 2015 (=Jones vs Rose 2) but then he has won three consecutive fights defeating Ben Hall in his last one. Antonio Margarito vs Carson Jones is the main event of the evening. Watch the video and rate this fight!