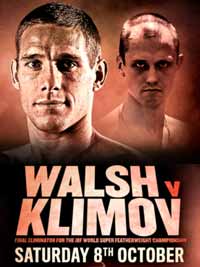 Review by AllTheBestFights.com: 2016-10-08, pretty good fight between Liam Walsh and Andrey Klimov: it gets three stars.

The undefeated Liam Walsh entered this fight with a perfect record of 20-0-0 (14 knockouts) and he is ranked as the No.34 super featherweight in the world. He has fought once in 2016 beating Troy James.
His opponent, Andrey Klimov, has an official boxing record of 19-2-0 (9 knockouts) but he is not ranked as he hasn’t fought since June 13, 2015 when he was defeated by Jose Pedraza. Walsh vs Klimov is the IBF super-featherweight title final eliminator. Watch the video and rate this fight!