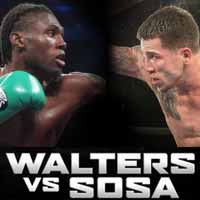 Review by AllTheBestFights.com: 2015-12-19, some good exchanges between Nicholas Walters and Jason Sosa but it is not enough to get three stars: it gets two.

The undefeated Nicholas Walters entered this fight with a perfect record of 26-0-0 (21 KOs=81%) and he is ranked as the No.1 featherweight in the world. He beat Nonito Donaire (=Donaire vs Walters) and Miguel Marriaga in his last two bouts (=Walters vs Marriaga).
His opponent, Jason Sosa, has an official boxing record of 18-1-3 (14 KOs=78%) and he entered as the No.29 super featherweight. He suffered his only loss in 2010 when he faced Treysean Wiggins, since then he has collected 15 consecutive victories and two draws. Walters vs Sosa is on the undercard of Bryant Jennings vs Luis Ortiz. Watch the video and rate this fight!

Report broken video
« 2015 MMA fight – Rafael dos Anjos vs Donald Cerrone 2 – full fight Video UFC on Fox 17
2015 BOXING fight – Bryant Jennings vs Luis Ortiz – full fight Video WBA »
HELP US!!! Since the CORONAVIRUS pandemic started, AllTheBestFights.com has struggled to survive! If you have enjoyed this website for the past 10 years, today we ask you for a little help: