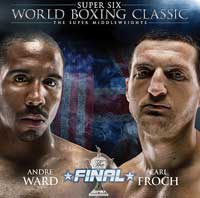 Review: 2011-12-17, good fight even if sometime there was too much clinching: three stars (fight ended by unanimous decision). The undefeated Andre Ward (24-0-0) entered as the No.2 super middleweight in the world while Carl Froch (28-1-0) entered as the No.3. Ward vs Froch is the Super Six Final and is valid for the WBC and WBA Super World super middleweight titles. Watch the video!