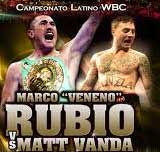 Review: 2011-12-16, even with the TKO in the fifth round the fight between Marco Antonio Rubio and Matt Vanda was not spectacular: two stars. Marco Antonio Rubio (52-5-1) entered as the No.10 middleweight in the world while Matt Vanda (44-13-0) entered as the No.90. Rubio vs Vanda is valid for the vacant WBC Latino middleweight title. Watch the video!