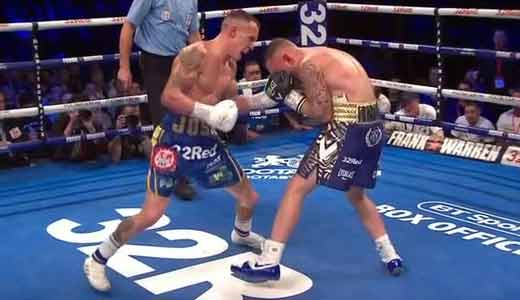 Review by AllTheBestFights.com: 2018-12-22, amazing fight thanks to a great performance by both boxers: Josh Warrington vs Carl Frampton is one of the best boxing fights of 2018 and it gets four stars (close to five)!

The world champion in two different weight classes Carl Frampton entered this fight with a pro boxing record of 26-1-0 (15 knockouts) and he is ranked as the No.2 featherweight in the world. Between 2016 and 2017 he faced current #1 Fw Leo Santa Cruz defeating the Mexican in their first bout (Santa Cruz vs Frampton I) and losing the rematch (Frampton vs Santa Cruz II); after this fight he has won three bouts beating Luke Jackson in his last one (Carl Frampton vs Luke Jackson).
His opponent, the undefeated Ibf Fw champ Josh Warrington, has a perfect record of 27-0-0 (6 knockouts) and he entered as the No.6 in the same weight class. In his last three bouts he has won over Kiko Martinez (Josh Warrington vs Kiko Martinez), Dennis Ceylan (Josh Warrington vs Dennis Ceylan) and Lee Selby (Lee Selby vs Josh Warrington). Frampton vs Warrington is valid for the IBF World featherweight title (Warrington’s first defense). Watch the video and rate this fight!