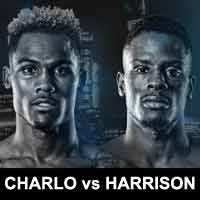 Review by AllTheBestFights.com: 2018-12-22, disappointing fight between Jermell Charlo and Tony Harrison: it gets two stars.

The undefeated Wbc light-Mw champion Jermell Charlo entered this fight with a perfect record of 31-0-0 (15 knockouts) and he is ranked as the No.4 super welterweight in the world. In his last three bouts he has won over Charles Hatley (Charlo vs Hatley), Erickson Lubin (Jermell Charlo vs Erickson Lubin) and Austin Trout (Jermell Charlo vs Austin Trout).
His opponent, Tony Harrison, has a boxing record of 27-2-0 (21 KOs=78%) and he entered as the No.14 in the same weight class. He lost to current #1 Jarrett Hurd last year (Jarrett Hurd vs Austin Trout) but then he has beat Paul Valenzuela Jr, George Sosa and Ishe Smith (Tony Harrison vs Ishe Smith). Charlo vs Harrison is valid for the WBC World super welterweight title (Charlo’s fourth defense); undercard of Jermall Charlo vs Matt Korobov. Watch the video and rate this fight!