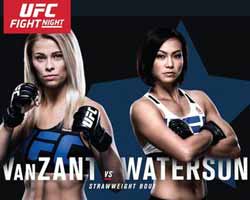 Review by AllTheBestFights.com: 2016-12-17, pretty good finish between Paige VanZant and Michelle Waterson but it is not enough to get three stars: it gets two (UFC Performance of the Night).

Paige VanZant entered this fight with a mma record of 7-2-0 (57% finishing rate) and she is ranked as the No.17 women’s stawweight in the world. She lost to Rose Namajunas last year (=Namajunas vs VanZant) but she came back to win against Bec Rawlings in 2016 (=VanZant vs Rawlings).
Her opponent, the black belt in karate and former Invicta Fc atomweight champion Michelle Waterson, has an official record of 13-4-0 (85% finishing rate) but she is not ranked as she hasn’t fought since July 12, 2015 when she defeated Angela Magana (=Waterson vs Magana). Before this bout she had lost to Herica Tiburcio (=Waterson vs Tiburcio). VanZant vs Waterson is the main event of UFC on Fox 22. Watch the video and rate this fight!