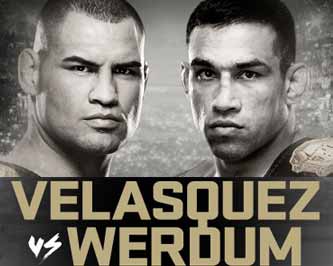 Review by AllTheBestFights.com: 2015-06-13, aggressive start, tough exchanges and great finish: Cain Velasquez vs Fabricio Werdum is close to get four stars (UFC Performance of the Night).

The black belt in Brazilian jiu-jitsu and Ufc Hw champion Cain Velasquez entered this fight with a professional mma record of 13-1-0 (85% ko/tko victory rate – he has never won via submission) but he is not ranked as he hasn’t fought since October 19, 2013 when he defeated Junior dos Santos (in their third fight, Velasquez vs dos Santos 3); after some month he underwent surgery to repair his torn meniscus. His only loss occurred in 2011 when he faced for the first time ‘Cigano’ dos Santos (=Dos Santos vs Velasquez) but then he beat twice Antonio ‘Bigfoot’ Silva and JDS.
His opponent, the black belt in Bjj and judo Fabricio Werdum, has an official record of 19-5-1 (79% finishing rate) and he entered as the No.1 heavyweight in the world. ‘Vai Cavalo’ Werdum suffered his last defeat in 2011 when he faced Alistair Overeem (=Overeem vs Werdum), since then he has collected five consecutive victories winning the interim Ufc Hw title in his last bout, against Mark Hunt (=Werdum vs Hunt). Velasquez vs Werdum, main event of Ufc 188, is valid for the Ufc heavyweight title. Watch the video and rate this fight!