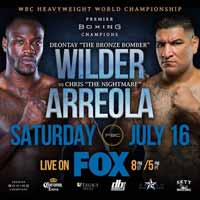 Review by AllTheBestFights.com: 2016-07-16, some good exchanges but it is not enough to gets three stars: Deontay Wilder vs Chris Arreola gets two.

The undefeated Wbc champion Deontay Wilder entered this fight with a perfect record of 36-0-0 (35 KOs=97%) and he is ranked as the No.3 heavyweight in the world (currently the #1 in this division is Tyson Fury). He won the Wbc belt against Bermane Stiverne in 2015 (=Stiverne vs Wilder) and he defended it three times, the last one against Artur Szpilka (=Wilder vs Szpilka).
His opponent, Chris Arreola, has a boxing record of 36-4-1 (31 KOs=86%) and he entered as the No.46 in the same weight class. He lost twice to Bermane Stiverne (in 2013 Arreola vs Stiverne I and in 2014 Stiverne vs Arreola II) but then he has collected two victories and one draw. Actually, Arreola’s second victory, against Travis Kauffman (=Arreola vs Kauffman), was overturned to No-Decision, as Arreola failed the post fight drug test. Wilder vs Arreola is valid for the WBC World heavyweight title (Wilder’s fourth defense). Watch the video and rate this fight!