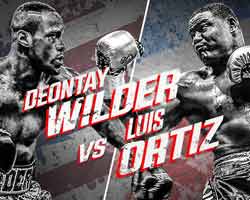 Review by AllTheBestFights.com: 2018-03-03, nice and tough fight between Deontay Wilder and Luis Ortiz: it gets three stars.

Both undefeated the Wbc Hw champion Deontay Wilder entered this fight with a perfect record of 39-0-0 (38 KOs=97%) and he is ranked as the No.3 heavyweight in the world (currently the #1 in this division is Anthony Joshua) while his opponent, the former interim Wba champion Luis Ortiz, has an official boxing record of 28-0-0 (24 KOs=80%) and he entered as the No.4 in the same weight class. In their last three bouts ‘The Bronze Bomber’ Wilder has won over Chris Arreola (Wilder vs Arreola), Gerald Washington (Wilder vs Washington) and Bermane Stiverne (Deontay Wilder vs Bermane Stiverne 2) while ‘King Kong’ Ortiz has defeated Malik Scott (Ortiz vs Scott), David Allen (Ortiz vs Allen) and Daniel Martz (Luis Ortiz vs Daniel Martz). Wilder vs Ortiz is valid for the WBC World heavyweight title (Wilder’s sixth defense); they also faced each other a second time on November 23, 2019 (Deontay Wilder vs Luis Ortiz 2). Watch the video and rate this fight!

(Free embeddable video hosted on Youtube and not uploaded by AllTheBestFights)
https://www.youtube.com/watch?v=fRP8Ap2DfXY