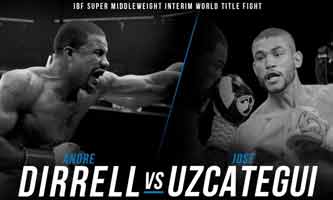 Review by AllTheBestFights.com: 2018-03-03, some good exchanges between Andre Dirrell and Jose Uzcategui 2 but it is not enough to get three stars: it gets two.

The interim Ibf super-Mw champion Andre Dirrell entered this fight with a record of 26-2-0 (16 knockouts) and he is ranked as the No.6 super middleweight in the world (currently the #1 in this division is George Groves). He lost to James DeGale in 2015 (DeGale vs Dirrell) but then he has defeated Blake Caparello (Dirrell vs Caparello) and Jose Uzcategui in their first fight (via disqualification since Jose hit the American after the bell but ‘Bolivita’ was ahead on points, Andre Dirrell vs Jose Uzcategui I).
His opponent, Jose Uzcategui, has a boxing record of 26-2-0 (22 KOs=85%) and he entered as the No.23 in the same weight class. ‘Bolivita’ Uzcategui’s only real loss occurred in 2014 when he faced Matt Korobov (Korobov vs Uzcategui), after this bout he won four bouts beating Derrick Findley and Fabiano Pena in 2016. Dirrell vs Uzcategui 2 is valid for the interim IBF World super middleweight title (Direll’s first defense); undercard of Deontay Wilder vs Luis Ortiz. Watch the video and rate this fight!

Their previous fight: Andre Dirrell vs Jose Uzcategui I