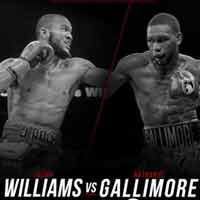 Review by AllTheBestFights.com: 2018-04-07, pretty good fight between Julian Williams and Nathaniel Gallimore: it gets three stars.

Julian Williams entered this fight with a pro boxing record of 24-1-1 (15 knockouts) and he is ranked as the No.7 super welterweight in the world (currently the #1 in this division is Erislandy Lara). He suffered his only loss against Jermall Charlo in 2016 (Charlo vs Williams) but he came back to win in 2017 with Joshua Conley (Williams vs Conley) and then beating Ishe Smith (Julian Williams vs Ishe Smith).
His opponent, Nathaniel Gallimore, has a record of 20-1-1 (17 KOs=85%) and he entered as the No.16 in the same weight class. He was defeated by Virgilijus Stapulionis in 2016 (via split decision) but then he has won seven bouts defeating Justin DeLoach (Justin DeLoach vs Nathaniel Gallimore) and Esau Herrera in his last two. Williams vs Gallimore is on the undercard of Erislandy Lara vs Jarrett Hurd. Watch the video and rate this fight!

(Free embeddable video hosted on Youtube and not uploaded by AllTheBestFights)
https://www.youtube.com/watch?v=RNE8AOtS43U