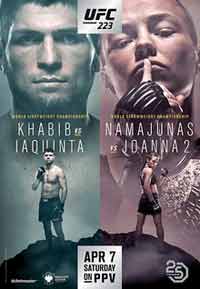 Review by AllTheBestFights.com: 2018-04-07, fight not particularly good between Renato Moicano Carneiro and Calvin Kattar: it gets two stars.

The black belt in Bjj Renato Carneiro entered this fight with a professional record of 11-1-1 (45% submission victory rate – he has never won via ko/tko) and he is ranked as the No.17 featherweight in the world. He fought twice last year beating Jeremy Stephens (Stephens vs Carneiro) and losing to Brian Ortega (Renato Carneiro vs Brian Ortega).
His opponent, Calvin Kattar, has a mma record of 18-2-0 (56% finishing rate) and he entered as the No.23 in the same weight class. He suffered his last loss when he faced Don Carlo-Clauss in 2010, since then he has won ten consecutive bouts beating Andre Fili in 2017 and Shane Burgos in 2018 (Calvin Kattar vs Shane Burgos). Moicano vs Kattar is on the undercard of Khabib Nurmagomedov vs Al Iaquinta – UFC 223. Watch the video and rate this fight!