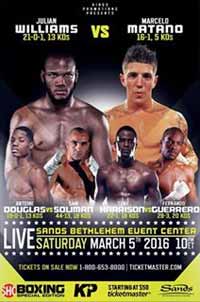 Review by AllTheBestFights.com: 2016-03-05, some good exchanges between Julian Williams and Marcello Matano but it is not enough to get three stars: it gets two.

The undefeated Julian Williams entered this fight with a boxing record of 21-0-1 (13 knockouts) and he is ranked as the No.13 super welterweight in the world. He fought three times last year winning over Joey Hernandez, Arman Ovsepyan (=Williams vs Ovsepyan) and Luciano Leonel Cuello (=Williams vs Cuello).
His opponent, Marcello Matano, has an official record of 16-1-0 (5 knockouts) and he entered as the No.49 in the same weight class. He suffered his only loss when he faced Felice Moncelli in 2014, since then he has won four consecutive fights. Williams vs Matano is the main event of the evening. Watch the video and rate this fight!

Video:
Official highlights – we are going to post the full fight video as soon as we find it