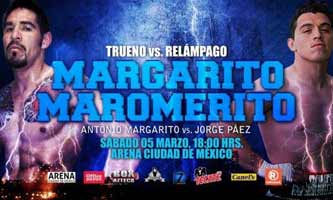 Review by AllTheBestFights.com: 2016-03-05, amazing performance by both boxers: Antonio Margarito vs Jorge Paez Jr is very close to get four stars!

The former Wbo, Ibf and Wba Ww champion Antonio Margarito entered this fight with a record of 38-8-0 (27 knockouts) but he is not ranked as he hasn’t fought since December 3, 2011 when he lost the rematch with Miguel Cotto (=Cotto vs Margarito 2).
His opponent, Jorge Paez Jr, has an official boxing record of 39-7-2 (23 knockouts) and he entered as the No.99 welterweight in the world but ‘Maromerito’ won just one out of his last three bouts, against Daniel Echeverria (=Echeverria vs Paez Jr); after this bout he lost to Carlos Ocampo (=Paez vs Ocampo). Margarito vs Paez is the main event of the evening. Watch the video and rate this fight!