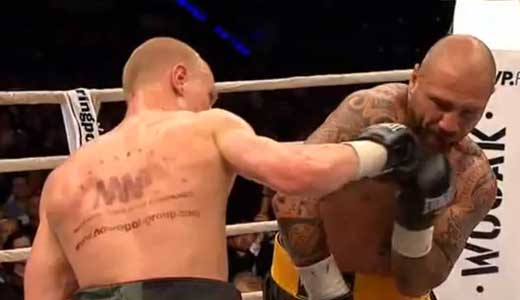 Review: 2010-05-15, high pace fight, balanced and valid for a world title (vacant WBC cruiserweight), the second fight between Krzysztof Wlodarczyk and Giacobbe Fragomeni was one of the best boxing fights of 2010. In the first fight (fought in Italy in 2009) Fragomeni was the defending champion and the match ended in a draw but in the rematch Wlodarczyk was fighting in front of his fans and so he was absolutely determined to win the belt. Giacobbe Fragomeni (26-2-1) pushed forward almost every round but at the end of the sixth Wlodarczyk (42-2-1) knocked down him, the Italian boxer recovered but in the eighth went to the canvas another time and the fight ended by TKO (‘Diablo’ Wlodarczy and Fragomeni also faced each other a third time on December 6, 2013 = Wlodarczyk vs Fragomeni 3). Watch the video!