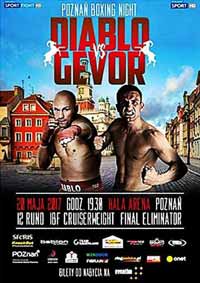 Review by AllTheBestFights.com: 2017-05-20, close fight but not so exciting: Krzysztof Wlodarczyk vs Noel Gevor gets two stars.

The former Wbc and Ibf Cw champion Krzysztof Wlodarczyk entered this fight with a pro record of 52-3-1 (37 knockouts) and he is ranked as the No.14 cruiserweight in the world. ‘Diablo’ Wlodarczyk lost to Grigory Drozd in 2014 (=Wlodarczyk vs Drozd) but then he has won over Valery Brudov (=Wlodarczyk vs Brudov), Kai Kurzawa (=Wlodarczyk vs Kurzawa) and Leon Harth.
His opponent, the undefeated Noel Gevor, has a perfect boxing record of 22-0-0 (10 knockouts) and he entered as the No.27 in the same weight class. He fought three times last year beating Valery Brudov, Cristian Javier Medina and Stephen Simmons. Krzysztof Wlodarczyk vs Noel Gevor, is the final eliminator for the IBF cruiserweight title. Watch the video and rate this fight!