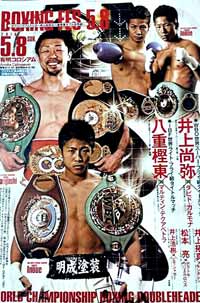 The Ibf champion Akira Yaegashi entered this fight with a pro boxing record of 23-5-0 (12 knockouts) and he is ranked as the No.5 light flyweight in the world (currently the #1 in this division is Donnie Nietes). He lost two consecutive bouts in 2014, against Roman Gonzalez (=Yaegashi vs Gonzalez) and Pedro Guevara (=Yaegashi vs Guevara), but then he has won three fights defeating Songseanglek Phosuwangym, Said M Said and Javier Mendoza (=Mendoza vs Yaegashi).
His opponent, Martin Tecuapetla, has a record of 13-6-3 (10 KOs=77%) and he entered as the No.15 in the same weight class. He was defeated by Milan Melindo in 2014 (=Melindo vs Tecuapetla), and then he has collected one draw and two wins. Yaegashi vs Tecuapetla is valid for the IBF World light flyweight title (Yaegashi’s first defense); undercard of Naoya Inoue vs David Carmona. Watch the video and rate this fight!

Video: (Free embeddable video hosted on Ok.ru and not uploaded by AllTheBestFights)