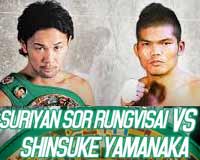 Review: 2014-10-22, some good combinations between Shinsuke Yamanaka and Suriyan Sor Rungvisai but it is not enought to get three stars. The undefeated Shinsuke Yamanaka entered this fight with a professional boxing record of 21-0-2 (16 KOs=76%) and he is ranked as the No.1 bantamweight in the world, he has fought once in 2014 beating Stephane Jamoye (=Yamanaka vs Jamoye).
His opponent, Suriyan Sor Rungvisai, has an official record of 37-5-1 (16 knockouts) and he entered as the No.11 in the same weight class, he suffered his last defeat in 2012 when he faced Yota Sato losing his Wbc super-Flw title, since then he has won 17 consecutive bouts! Yamanaka vs Rungvisai is valid for the WBC bantamweight title (Yamanaka’s seventh defense). Watch the video and rate this fight!