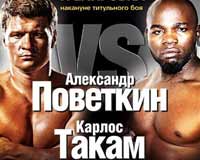 Review: 2014-10-24, very nice and tough fight between Alexander Povetkin and Carlos Takam: it is very close to get four stars! Alexander Povetkin entered this fight with a professional boxing record of 27-1-0 (19 knockouts) and he is ranked as the No.6 heavyweight in the world, he suffered his only loss last year when he faced #1 Wladimir Klitschko (=Klitschko vs Povetkin); after that bout he came back to win defeating Manuel Charr (=Povetkin vs Charr).
His opponent, Carlos Takam, has an official record of 30-1-1 (23 KOs=76%) and he entered as the No.5 in the same weight class, he lost his only pro-bout in 2009 against Gregory Tony, since then he has collected 12 victories and one draw, against Mike Perez (=Perez vs Takam). Povetkin vs Takam is valid for the WBC Silver heavyweight title. Watch the video and rate this fight!