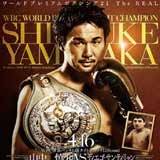 Review by AllTheBestFights.com: 2015-04-16, pretty good finish between Shinsuke Yamanaka and Diego Santillan but it is not enough to get three stars: it gets two.

Both undefeated, the Japanese Shinsuke Yamanaka entered this fight with a professional boxing record of 22-0-2 (16 knockouts) and he is ranked as the No.1 bantamweight in the world. He won the vacant WBC world belt in 2011, against Christian Esquivel (=Yamanaka vs Esquivel), and then he successfully defended it seven times. He fought twice last year beating Stephane Jamoye (=Yamanaka vs Jamoye) and Suriyan Sor Rungvisai (=Yamanaka vs Rungvisai).
His opponent, Diego Ricardo Santillan, has a perfect record of 23-0-0(15 knockouts) and he entered as the No.33 in the same weight class but he has not faced any notable opponents in his professional career; he fought just once in 2014 defeating Diego Luis Pichardo Liriano. Yamanaka vs Santillan is valid for the WBC World bantamweight title (Yamanaka’s eighth defense). Watch the video and rate this fight!