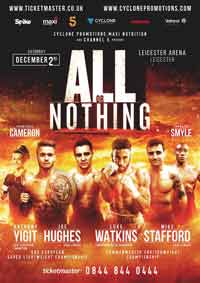 Review by AllTheBestFights.com: 2017-12-02, pretty good fight between Anthony Yigit and Joe Hughes: it gets three stars.

The undefeated Anthony Yigit entered this fight with a boxing record of 20-0-1 (7 knockouts) and he is ranked as the No.12 super lightweight in the world. He has already fought twice in 2017 winning over Lenny Daws (=Daws vs Yigit) and Sandor Martin (=Yigit vs Martin).
His opponent, Joe Hughes, has an official record of 15-2-1 (6 knockouts) and he entered as the No.50 in the same weight class. He lost to Jack Catterall last year (=Catterall vs Hughes) but then he has beat Andy Keates and has drawn with Tyrone Nurse. Yigit vs Hughes is valid for the EBU (European) super lightweight title. Watch the video and rate this fight!

(Free embeddable video hosted on Dailymotion and not uploaded by AllTheBestFights)
https://www.dailymotion.com/video/x6b89ho