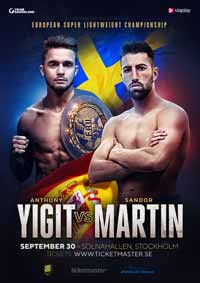 Review by AllTheBestFights.com: 2017-09-30, good fight between Anthony Yigit and Sandor Martin: it gets three stars.

The undefeated Anthony Yigit entered this fight with a professional record of 19-0-1 (7 knockouts) and he is ranked as the No.13 super lightweight in the world. In his last three bouts he has defeated Philip Sutcliffe Jnr, Armando Robles and Lenny Daws (=Daws vs Yigit).
His opponent, Sandor Martin, has a boxing record of 29-1-0 (10 knockouts) and he entered as the No.24 in the same weight class. He lost to Alexandre Lepelley in 2013 but since then he has collected 14 consecutive victories beating Chaquib Fadil in 2017. Anthony Yigit vs Sandor Martin is valid for the EBU (European) super lightweight title (Yigit’s first defense). Watch the video and rate this fight!