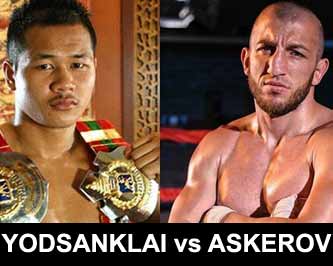 Review by AllTheBestFights.com: 2015-10-31, fight not particularly exciting between Yodsanklai Fairtex and Dzhabar Askerov: it gets two stars.

The former Lumpinee, Wbc, Wpmf and Wmc champion Yodsanklai Fairtex entered this fight with a pro kickboxing record of 193-71-4 (76 knockouts) and he is ranked as the No.4 super welterweight in the world. He suffered his last loss in 2011 when he faced Artur Kyshenko (4-stars-fight, Kyshenko vs Yodsanklai), since then he has won 20 consecutive fights beating Marco Tentori in his last one.
His opponent, Dzhabar Askerov, has a record of 87-31-1 (43 knockouts) and he entered as the No.8 in the same weight class. He lost to Cosmo Alexandre at the end of 2014 (=Askerov vs Cosmo 2), but he came back to win in 2015 defeating Nonsai Sor Sanyakorn (=Askerov vs Nonsai 2), Enriko Kehl (=Askerov vs Kehl 2) and Liu Mingzhi (=Askerov vs Mingzhi). Yodsanklai vs Askerov is the main event of Kunlun Fight 33. Watch the video and rate this fight!