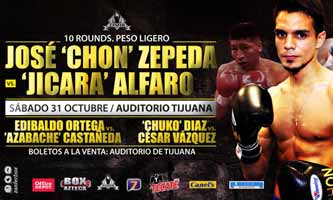 Review by AllTheBestFights.com: 2015-10-31, the fight between Jose Zepeda and Jose Alfaro gets two stars, they have to face each other a second time.

Jose Zepeda entered this fight with a pro boxing record of 23-1-0 (20 KOs=87%) and he is ranked as the No.21 lightweight in the world while his opponent, the former Wba Lw champion Jose Alfaro, has a record of 28-9-1 (24 KOs=86%). Zepeda suffered his only loss just some months ago, against Terry Flanagan (=Flanagan vs Zepeda), while Alfaro lost to Eduard Troyanovsky in 2014, but then he came back to win in 2015 against Gonzalo Munguia. ‘Chon’ Zepeda vs Alfaro is the main event of the evening. Watch the video and rate this fight!