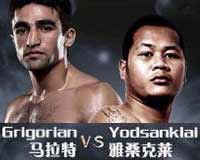 Review by AllTheBestFights.com: 2015-04-12, nice and tough exchanges between Yodsanklai Fairtex and Marat Grigorian: it gets three stars.

The former Lumpinee, WMC and WBC world champion Yodsanklai Fairtex entered this fight with a professional kickboxing record of 192-71-4 (76 knockouts) and he is ranked as the No.5 super welterweight in the world. He suffered two consecutive defeats in 2011, against Prakaysaeng Sit Or and Artur Kyshenko (4-stars-fight, Kyshenko vs Yodsanklai), but since then he has won 15 consecutive bouts beating Alex Oller in his last fight.
His opponent, Marat Grigorian, has an official record of 39-5-1 (21 knockouts) and he entered as the No.6 in the same weight class. He lost to #1 Robin van Roosmalen last year (=Roosmalen vs Grigorian) but after this fight he has won four bouts, winning the Kunlun Fight Mw tournament (Group D) two months ago beating Aikpracha Meenayothin (=Aikpracha vs Grigorian) and Fernando Calzetta (=Grigorian vs Calzetta). Yodsanklai vs Grigorian is the main event of Kunlun Fight 22. Watch the video and rate this fight!