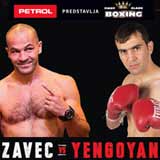 Review by AllTheBestFights.com: 2015-04-11, pretty good fight between Sasha Yengoyan and Jan Zaveck: it gets three stars.

Sasha Yengoyan entered this fight with a pro boxing record of 31-1-1 (21 knockouts) and he is ranked as the No.16 super welterweight in the world, his only defeat occurred in 2012 when he faced Aslanbek Kozaev, since then he has won ten consecutive bouts beating Shavlego Tsamalaidze in his last fight.
His opponent, the former Ibf welterweight world champion Jan Zaveck, has a record of 34-3-0 (19 knockouts) and he entered as the No.41 in the same weight class. The last time he lost was in 2013, against Keith Thurman (=Thurman vs Zaveck), after this bout he came back to win defeating Sebastien Allais and Ferenc Hafner. Yengoyan vs Zaveck is valid for the WBF super welterweight title. Watch the video and rate this fight!