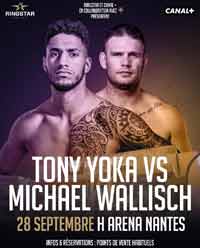 Review by AllTheBestFights.com: 2019-09-28, fight not particularly good between Tony Yoka and Michael Wallisch: it gets two stars.

The 2016 Olympic super heavyweight gold medalist Tony Yoka entered this fight with a perfect boxing record of 6-0-0 (5 KOs=83%) and he is ranked as the No.44 heavyweight in the world. In his last three fights he has won over Cyril Leonet (Tony Yoka vs Cyril Leonet), David Allen (Tony Yoka vs David Allen) and Alexander Dimitrenko (Tony Yoka vs Alexander Dimitrenko).
His opponent, Michael Wallisch, has a record of 20-2-0 (13 knockouts) and he entered as the No.90 in the same weight class. He lost two consecutive bouts between 2018 and 2019, against Christian Hammer and Efe Ajagba (Efe Ajagba vs Michael Wallisch) but then he came back to win with Abdulnaser Delalic in June. Yoka vs Wallisch is the main event of the evening. Watch the video and rate this fight!