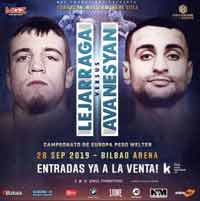 Review by AllTheBestFights.com: 2019-09-28, the second fight between David Avanesyan and Kerman Lejarraga 2 was not as exciting as the first one: it gets two stars.

The former Wba Ww champion David Avanesyan entered this fight with a boxing record of 24-3-1 (12 knockouts) and he is ranked as the No.12 welterweight in the world. He was defeated by Egidijus Kavaliauskas last year (David Avanesyan vs Egidijus Kavaliauskas) but he came back to win against Lejarraga in their first bout in March 2019 (Kerman Lejarraga vs David Avanesyan I).
His opponent, Kerman Lejarraga, has an official record of 28-1-0 (23 KOs=82%) and he entered as the No.23 in the same weight class. After losing the fight against Avanesyan he has beat Luis Solis in June 2019. Avanesyan vs Lejarraga 2 is valid for the EBU European welterweight title (Avanesyan’s first defense). Watch the video and rate this fight!