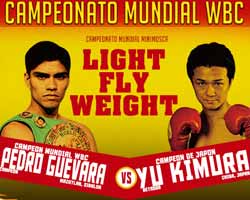 Review by AllTheBestFights.com: 2015-11-28, good fight between Pedro Guevara and Yu Kimura: it gets three stars.

Pedro Guevara entered this fight a professional boxing record of 26-1-1 (17 knockouts) and he is ranked as the No.1 light flyweight in the world. He suffered his only loss in 2012 when he faced John Riel Casimero (via split decision, Casimero vs Guevara), since then he has collected eight consecutive victories winning the Wbc light-Flw title last year against Akira Yaegashi (=Yaegashi vs Guevara) and defending it twice, the second one with Ganigan Lopez (=Guevara vs Lopez).
His opponent, Yu Kimura, has an official record of 17-2-1 (3 knockouts) and he entered as the No.6 in the same weight class. He lost to Ryoichi Taguchi in 2011 but since then he has won eight bouts. ‘Jibran’ Guevara vs Kimura is valid for the WBC World light flyweight title (Guevara’s third defense); undercard of Carlos Cuadras vs Koki Eto. Watch the video and rate this fight!