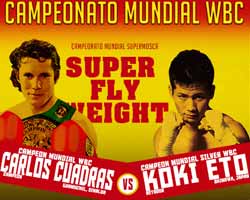 Review by AllTheBestFights.com: 2015-11-28, very nice and tough fight between Carlos Cuadras and Koki Eto: it is close to get four stars!

The undefeated Carlos Cuadras entered this fight with a pro boxing record of 33-0-1 (26 KOs=79%) and he is ranked as the No.2 super flyweight in the world (currently the #1 in this division is Naoya Inoue). The only man who stopped him in a draw was Jose Salgado in 2014 (=Cuadras vs Salgado), after this bout he has won three fights beating Dixon Flores in his last one (=Cuadras vs Flores).
His opponent, the former interim Wba flyweight champion Koki Eto, has a record of 17-3-1 (13 KOs=76%) and he entered as the No.11 in the same weight class. He suffered his last loss in 2013 when he faced Yodmongkol Vor Saengthep (=Eto vs Yodmongkol), since then he has won three consecutive bouts defeating Yuki Fukumoto in his last. ‘Principe’ Cuadras vs Eto is valid for the WBC World super flyweight title (Cuadras’ fourth defense). Watch the video and rate this fight!