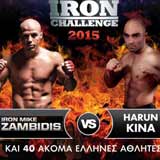 Review by AllTheBestFights.com: 2015-01-17, pretty good fight between Mike Zambidis and Harun Kina: it gets three stars.

Mike Zambidis entered this fight with a professional kickboxing record of 153-22-0 (86 knockouts) while unfortunately we don’t know the official kickboxing record of his opponent, Harun Kina; after their first fight, won by Zambidis in 2013 (Zambidis vs Kina I) Kina had five victories and two defeats but he usually fights as a mixed martial artist but his pro mma record is 4-10-0. ‘Iron’ Mike Zambidis, after the victory against Kina, has lost two bouts: against Xu Yan (=Zambidis vs Xu Yan) and the rematch against Batu Khasikov (=Zambidis vs Khasikov 2). Zambidis vs Kina 2, main event of Iron Challenge 2015, is valid for the SuperKombat middleweight title (Zambidis’ first defense). Watch the video and rate this fight!

Where: Indoor Stadium of Tae Kwon Do, Athens, Greece