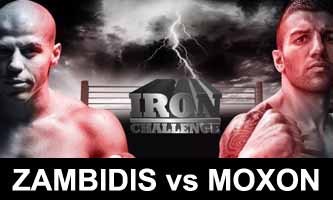 Review by AllTheBestFights.com: 2015-06-27, nice and tough fight between Mike Zambidis and Steve Moxon: it gets three stars.

Mike Zambidis entered this fight with a pro kickboxing record of 155-22-0 (87 KOs) and he is at his last professional fight. He suffered two consecutive defeats in 2014, against Xu Yan (=Zambidis vs Xu Yan) and Batu Khasikov (=Zambidis vs Khasikov 2) but he came back to win 2015 beating Harun Kina (=Zambidis vs Kina 2) and Erkan Varol (=Zambidis vs Varol).
His opponent, Steve Moxon, has an official record of 39-12-1 (23 knockouts) and he entered as the No.14 super welterweight in the world. He has already fought four times in 2015 winning over Aikpracha Meenayothin, losing with Andy Ristie (=Ristie vs Moxon), defeating Hu Yafei and losing again, against Robin van Roosmalen (=Roosmalen vs Moxon). Zambidis vs Moxon is the main event of Iron Challenge 2015 – Athens, Greece. Watch the video and rate this fight!