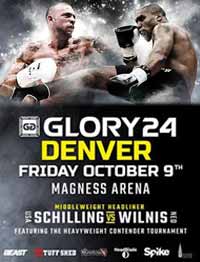 Review by AllTheBestFights.com: 2015-10-09, nice and tough fight between Benjamin Adegbuyi and Mladen Brestovac: it gets three stars.

Benjamin Adegbuyi entered this fight with a kickboxing record of 20-3-0 (14 knockouts) and he is ranked as the No.3 heavyweight in the world. He has already fought three times in 2015 beating Daniel Lentie (=Adegbuyi vs Lentie) and Alexandr Soldatkin but between these two fights he lost to #1 Rico Verhoeven (=Verhoeven vs Adegbuyi).
His opponent, Mladen Brestovac, has a record of 49-9-1 (33 knockouts) and he entered as the No.4 in the same weight class. He suffered his last loss in 2012 when he faced for the first time Benjamin Adegbuyi, since then he has collected 12 consecutive victories. Adegbuyi vs Brestovac 2 is the semifinal of the Glory heavyweight contender tournament; undercard of Joe Schilling vs Jason Wilnis – Glory 24. Watch the video and rate this fight!