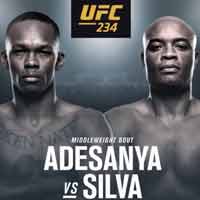 Review by AllTheBestFights.com: 2019-02-10, good fight between Israel Adesanya and Anderson Silva: it gets three stars (UFC Fight of the Night).

The undefeated former Glory kickboxing fighter Israel Adesanya entered this fight with a perfect mma record of 15-0-0 (87% ko/tko victory rate – he has never won via submission) and he is ranked as the No.8 middleweight in the world (currently the #1 in this division is Robert Whittaker). He fought four times last year winning over Rob Wilkinson, Martin Vettori (Israel Adesanya vs Marvin Vettori), Brad Tavares (Brad Tavares vs Israel Adesanya) and Derek Brunson (Derek Brunson vs Israel Adesanya).
His opponent, the 43-year-old (14 years older than Adesanya) black belt in Bjj, tae-kwon-do and former Ufc Mw champion Anderson Silva, has an official record of 34-8-0 (76% finishing rate) but he is not ranked as he hasn’t fought since February 11, 2017 when he defeated Derek Brunson (Anderson Silva vs Derek Brunson). Before this bout, in 2016, ‘The Spider’ Silva had lost two consecutive fights: against Michael Bisping in February (controversial decision, Silva vs Bisping) and with Daniel Cormier in July (Cormier vs Silva). Adesanya vs Silva is the new main event of UFC 234 (on the original fight card the main event was Robert Whittaker vs Kelvin Gastelum but the Australian pulled out of the event a few hours prior due to an abdominal hernia). Watch the video and rate this fight!