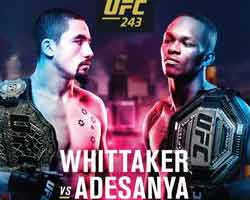 Review by AllTheBestFights.com: 2019-10-06, pretty good finish between Robert Whittaker and Israel Adesanya: it gets three stars (UFC Performance of the Night).

The black belt in hapkido, karate, Tuf Ww tournament winner and current Ufc Mw champion Robert Whittaker entered this fight with a professional mma record of 20-4-0 (70% finishing rate) but he is not ranked as he hasn’t fought since June 9, 2018 when he defeated Yoel Romero in their rematch (via split decision, Robert Whittaker vs Yoel Romero II). He had suffered two consecutive losses between 2013 and 2014, against Court McGee (McGee vs Whittaker) and Stephen Thompson (Whittaker vs Thompson), but then he has won nine consecutive bouts defeating Yoel Romero also in 2017 (Yoel Romero vs Robert Whittaker I).
His opponent, the undefeated former Glory kickboxing fighter and interim Ufc Mw champ Israel Adesanya, has a perfect record of 17-0-0 (76% ko/tko victory rate – he has never won via submission) and he entered as the No.2 middleweight in the world. In his last three bouts he has won over Derek Brunson (Derek Brunson vs Israel Adesanya), Anderson Silva (Israel Adesanya vs Anderson Silva) and Kelvin Gastelum (Kelvin Gastelum vs Israel Adesanya). Whittaker vs Adesanya, main event of UFC 243, is valid for the Ufc middleweight title; they also faced each other a second time on February 12, 2022 (Israel Adesanya vs Robert Whittaker 2). Watch the video and rate this fight!

Whittaker’s next fight: Robert Whittaker vs Darren Till