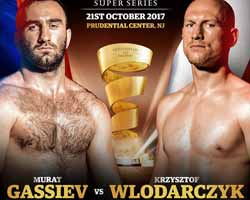 Review by AllTheBestFights.com: 2017-10-21, nice finish between Murat Gassiev and Krzysztof Wlodarczyk: it gets three stars.

The undefeated Ibf Cw champion Murat Gassiev entered this fight with a perfect boxing record of 24-0-0 (17 knockouts) and he is ranked as the No.4 cruiserweight in the world (currently the #1 in this division is Oleksandr Usyk). He fought twice last year defeating Jordan Shimmell (4-stars fight, Gassiev vs Shimmell) and Denis Lebedev (=Lebedev vs Gassiev).
His opponent, the former Ibf and Wbc Cw champion Krzysztof Wlodarczyk, has an official record of 53-3-1 (37 knockouts) and he entered as the No.13 in the same weight class. ‘Diablo’ Wlodarczyk suffered his last loss when he faced Grigory Drozd in 2014 (=Wlodarczyk vs Drozd) but then he has won four bouts beating Leon Harth and Noel Gevor in his last two (=Wlodarczyk vs Gevor). Gassiev vs Wlodarczyk is valid for the IBF World cruiserweight title (Gassiev’s first defense). Watch the video and rate this fight!