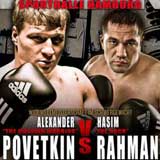 Review: 2012-09-29, pretty good fight with some heavy shots in the second round but it is not enough to get three stars. The undefeated Alexander Povetkin ranked as the No.5 heavyweight in the world, entered the fight with a record of 24-0-0 while Hasim Rahman had a record of 50-7-2 (Rahman is not ranked as he hasn’t fought since June 11, 2011). Povetkin vs Rahman is valid for the WBA World heavyweight title (Povetkin’s third defense). Watch the video!