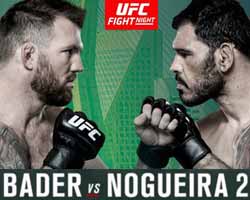 Review by AllTheBestFights.com: 2016-11-19, good fight between Ryan Bader and Antonio Rogerio Nogueira 2: it gets three stars.

The Tuf 8 light-Hw tournament winner Ryan Bader entered this fight with a professional record of 21-5-0 (52% finishing rate) and he is ranked as the No.5 light heavyweight in the world (currently the #1 in this division is Jon Jones). He has fought twice in 2016 losing to Anthony Johnson (=Johnson vs Bader) and beating Ilir Latifi (=Bader vs Latifi).
His opponent, the black belt in Brazilian jiu-itsu Antonio Rogerio Nogueira, has an official mma record of 22-7-0 (59% finishing rate) and he entered as the No.13 in the same weight class. ‘Minotouro’ suffered two consecutive defeats between 2014 and 2015, against Anthony Johnson (=Johnson vs Nogueira) and Mauricio ‘Shogun’ Rua (=Rua vs Nogueira 2), but he came back to win in 2016 against Patrick Cummins. In their first bout Bader defeated Minotouro via unanimous decision (Spetember 25, 2010); Bader vs Nogueira 2 is the main event of UFC Fight Night 100. Watch the video and rate this fight!