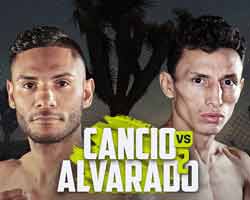 Review by AllTheBestFights.com: 2019-11-23, nice toe-to-toe fight between Andrew Cancio and Rene Alvarado 2: it gets three stars.

The Wba super-Fw champion Andrew Cancio entered this fight with a pro record of 21-4-2 (16 KOs=76%) and he is ranked as the No.3 super featherweight in the world (currently the #1 in this division is Miguel Berchelt). He lost to Joseph Diaz in 2016 (Joseph Diaz vs Andrew Cancio) but then he has won four bouts beating twice Alberto Machado in his last two (Alberto Machado vs Andrew Cancio I and Andrew Cancio vs Alberto Machado II).
His opponent, Rene Alvarado, has an official boxing record of 31-8-0 (20 knockouts) and he entered as the No.12 in the same weight class. He lost to Yuriorkis Gamboa in 2017 (Gamboa vs Alvarado) but then he has won seven consecutive bouts defeating Carlos Morales and Eusebio Osejo in his last two. In their first fight Cancio had beat Alvarado via ko (December 18, 2015); this second bout valid for the WBA World super featherweight title (Cancio’s second defense). Watch the video and rate this fight!