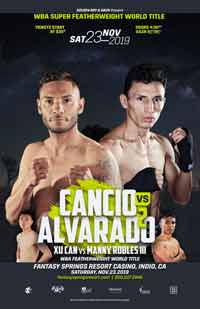 Review by AllTheBestFights.com: 2019-11-23, great performance by both boxers: Can Xu vs Manny Robles III is close to get four stars!

The Wba Fw champion Can Xu entered this fight with a record of 17-2-0 (3 knockouts) and he is ranked as the No.6 featherweight in the world (currently the #1 in this division is Leo Santa Cruz). He was defeated by Bao Dong in 2014 but since then he has won 14 consecutive fights beating Jesus M Rojas (Jesus M Rojas vs Can Xu) and Shun Kubo in 2019 (Can Xu vs Shun Kubo).
His opponent, the undefeated Manny Robles III, has a perfect boxing record of 18-0-0 (8 knockouts) and he entered as the No.72 in the same weight class. In his last three bouts he has won over Edgar Valerio, Jose Santos Gonzalez and Rigoberto Hermosillo. Xu Can vs Robles is valid for the WBA World featherweight title (Xu Can’s second defense); undercard of Andrew Cancio vs Rene Alvarado 2. Watch the video and rate this fight!

Xu Can’s next fight: Can Xu vs Leigh Wood

(Free embeddable video hosted on Youtube/Facebook/bilibili.com and not uploaded by AllTheBestFights)