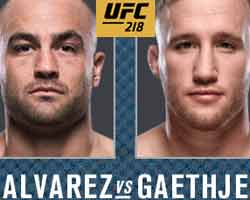 Review by AllTheBestFights.com: 2017-12-02, great performance by both fighters: Eddie Alvarez vs Justin Gaethje is close to get four stars (UFC Fight of the Night).

The former Ufc and Bellator Lw champion Eddie Alvarez entered this fight with a professional record of 28-5-0 (79% finishing rate) and he is ranked as the No.3 lightweight in the world. He beat Rafael dos Anjos in 2016 (=Dos Anjos vs Alvarez) but then he lost to current #1 Lw Conor McGregor (=Alvarez vs McGregor) and he has faced Dustin Poirier but the bout ended in a no-contest (=Alvarez vs Poirier).
His opponent, the undefeated Wsof Lw champion Justin Gaethje, has a perfect record of 18-0-0 (89% finishing rate) and he entered as the No.7 in the same weight class. In his last three fights he has won over Brian Foster (=Gaethje vs Foster), Luiz Firmino (=Gaethje vs Firmino) and Michael Johnson (Mma Fight of the year 2017 candidate, Johnson vs Gaethje). Alvarez vs Gaethje is on the undercard of Max Holloway vs Jose Aldo 2 – UFC 218. Watch the video and rate this fight!

(Free embeddable video hosted on Youtube and not uploaded by AllTheBestFights)
https://www.youtube.com/watch?v=49Q-I_es4Xc