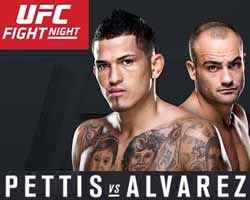 The black belt in tae-kwon-do and former Ufc and Wec Lw champion Anthony Pettis entered this fight with a professional record of 18-3-0 (83% finishing rate) and he is ranked as the No.2 lightweight in the world but he comes off the loss against #1 Rafael dos Anjos (=Pettis vs dos Anjos).
His opponent, the former bellator Lw champion Eddie Alvarez, has a mma record of 26-4-0 (81% finishing rate) and he entered as the No.6 in the same weight class. He lost to Donald Cerrone in 2014 (=Cerrone vs Alvarez) but he came back to win in 2015 beating Gilbert Melendez (=Melendez vs Alvarez). Pettis vs Alvarez is on the undercard of TJ Dillashaw vs Dominick Cruz – UFC Fight Night 81. Watch the video and rate this fight!